A place for the various members of AOL that think they know a lot about music to meet and discuss things. Usually this involves friendly and not so friendly banter.

MCUK is accessed usually by typing 'quick chat', or more frequently, 'qu', into the bar. This opens up the 'Complete Chat List', where you can select 'Music Chat' in the second menu, entitled 'Topics J-R'. 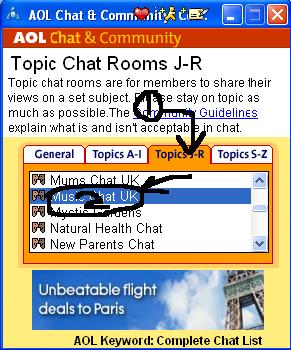 There is a certain, inpenetrable clique of users that frequent this room. Any attempts to interact with them, be they friends or otherwise, WILL be met with a cold, frosty reaction, followed by a slew of "haha's" from their inevitable array of online friends. It's suprising that people who are still using AOL even though it isn't 1997 anymore can be so mean to others.

Retrieved from "https://forumswiki.fandom.com/wiki/AOL_Music_Chat_UK?oldid=2989"
Community content is available under CC-BY-SA unless otherwise noted.